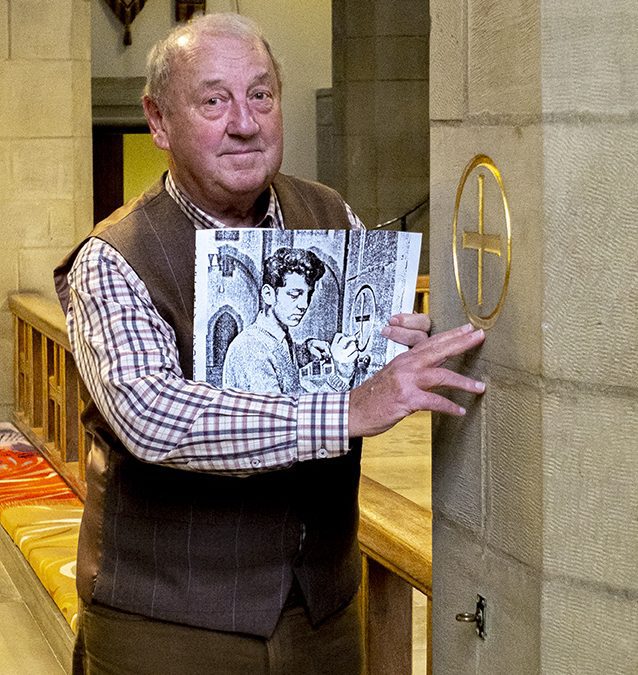 A visit to the Broadway in Bradford inspired Allan Stansfield (pictured) to investigate whether work he did as a fifteen-year-old in Bradford Cathedral was still there. Not only did he find his handiwork still there – work which includes one of the angels in the nave and the consecration crosses etched into the building work during the building’s extension in the 1960s – but he discovered a picture of his younger self in the cathedral’s archives, taken during his time there.

Allan, now 71, reminisced about his time working in the cathedral back in 1963.

“[Work at the cathedral was done by] Booths the building contractor, who got the stone from the quarry up in Bolton Woods. Booths subcontracted out some of their work, like the painting, and I got involved through working at Caygill signs.

“One of the first things we actually did at Bradford Cathedral were the two large candlestick holders, which were gilded, and two smaller ones. After that, work was on-going for a couple of years.

“We also did other internal work like the angels and the inscriptions. In those days the cathedral had pews so we had to put two ladders up and a plank across. We had regular work at the cathedral including all the engraving, and it took some time to do.

“I wanted to see if the things still existed, and they do. It was incredible to see, and how the 24-carat gold has survived and hasn’t discoloured.”

It was a trip to Bradford that prompted Allan to return to the cathedral.

“Whilst at The Broadway I said that I needed to go in to see if my work was still there, purely out of curiosity. To my surprise, everything is still there in-tact.”

It was whilst looking around Bradford Cathedral that Allan met Maggie Myers, Director of Education and Visitors, who revealed something surprising from the archive.

“When I came in, Maggie told me that she had a document of a young boy working on the consecration cross from the York and County Times, and when she came back, lo and behold, there was me!

“Seeing myself working on it at fifteen years old really took me back. It was strange to see, to have that print of me still around.”

Following his time working for Bagnalls, Allan later went on to work for Butterfield Signs before moving into the exhibition industry, which involved travelling for work in Europe. He later went on to set up a graphics department in Brighouse.

“Obviously everything has now gone digital. It all used to be handwritten – signs, windows, everything. We used to do a lot of the windows in Bradford, for solicitors and such like, and it would take a week with every day being a separate process.

“Digital printing means there’s sadly not much of our signage work left in Bradford that I did as a young man, so it was strange to be in the cathedral to see all my work still there!”

Having re-discovered his work, Allan plans to return to the cathedral next month to show his family.

“In the half-term I’m going to bring my grandchildren down to show them the work, especially the angel that I was commissioned to do. It was very interesting work and I’m glad it’s still here to be remembered.”

And for Allan Stansfield, it wasn’t just his work that connects him to the cathedral.

“Dr Donald Coggan, once Bishop of Bradford and later the Archbishop of York, and then Canterbury, was the person who confirmed me at Bradford Cathedral!”