Bradford Cathedral holds Eco Congregation status – the first cathedral in the north of England to receive this prestigious award.  A dedicated team of staff and volunteers has worked  to improve the carbon footprint of not only the Cathedral itself but the Close homes, and also encouraged the congregation to look at what they can do in their own homes. July 2022 marked the tenth anniversary of the Bradford District Fair Trade Way, and the Bradford Fairtrade Zone headed off on a series of walks.
Read More 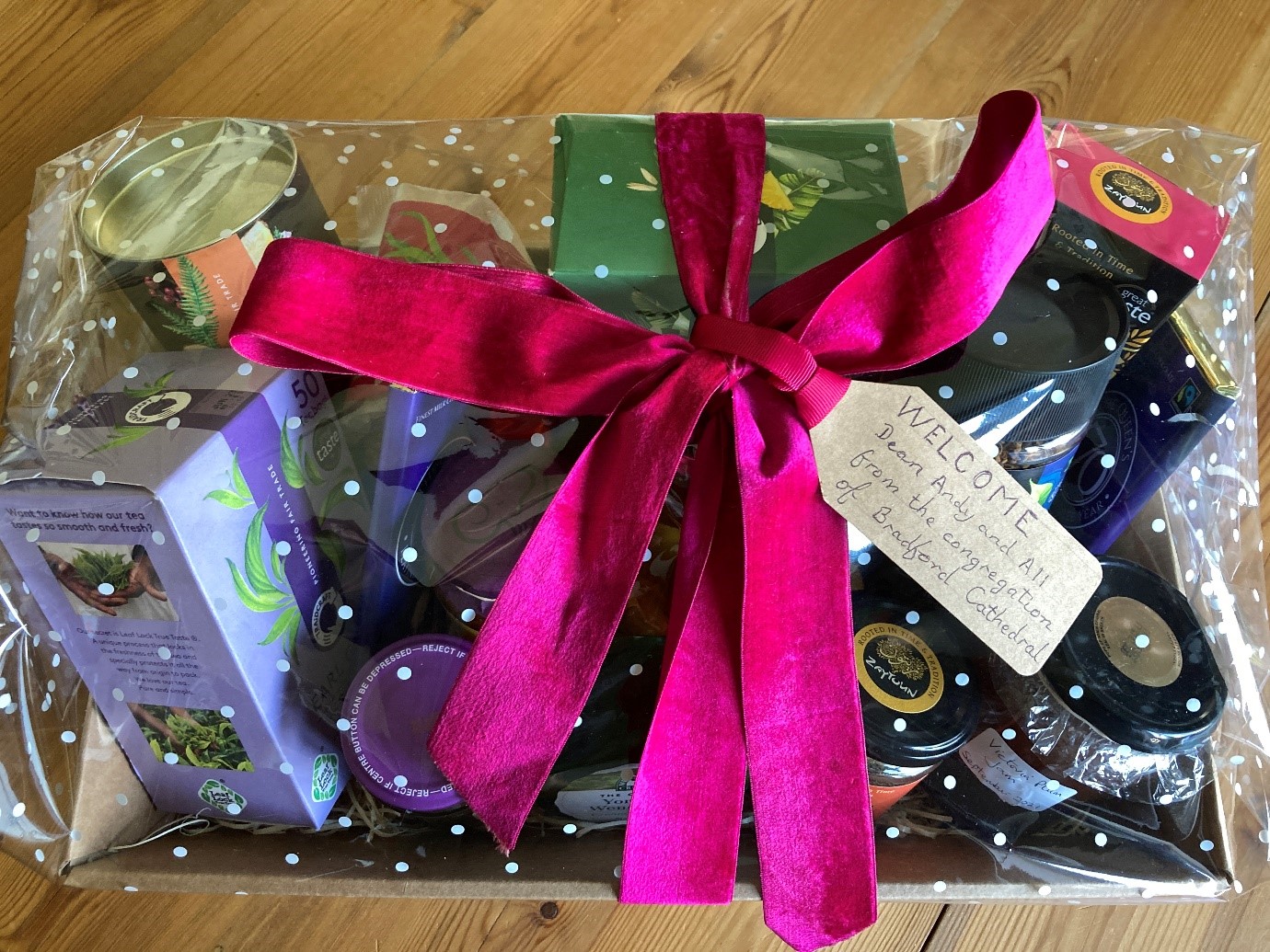 It was a real joy to create, on behalf of the congregation, a hamper filled with Fairtrade and locally produced items to welcome Dean Andy and his wife Ali. Everywhere the remains of bindweed hang on the trees and most of our time was spent clearing this as well as laying pieces of carpet round the smaller trees to give them a better chance this year. 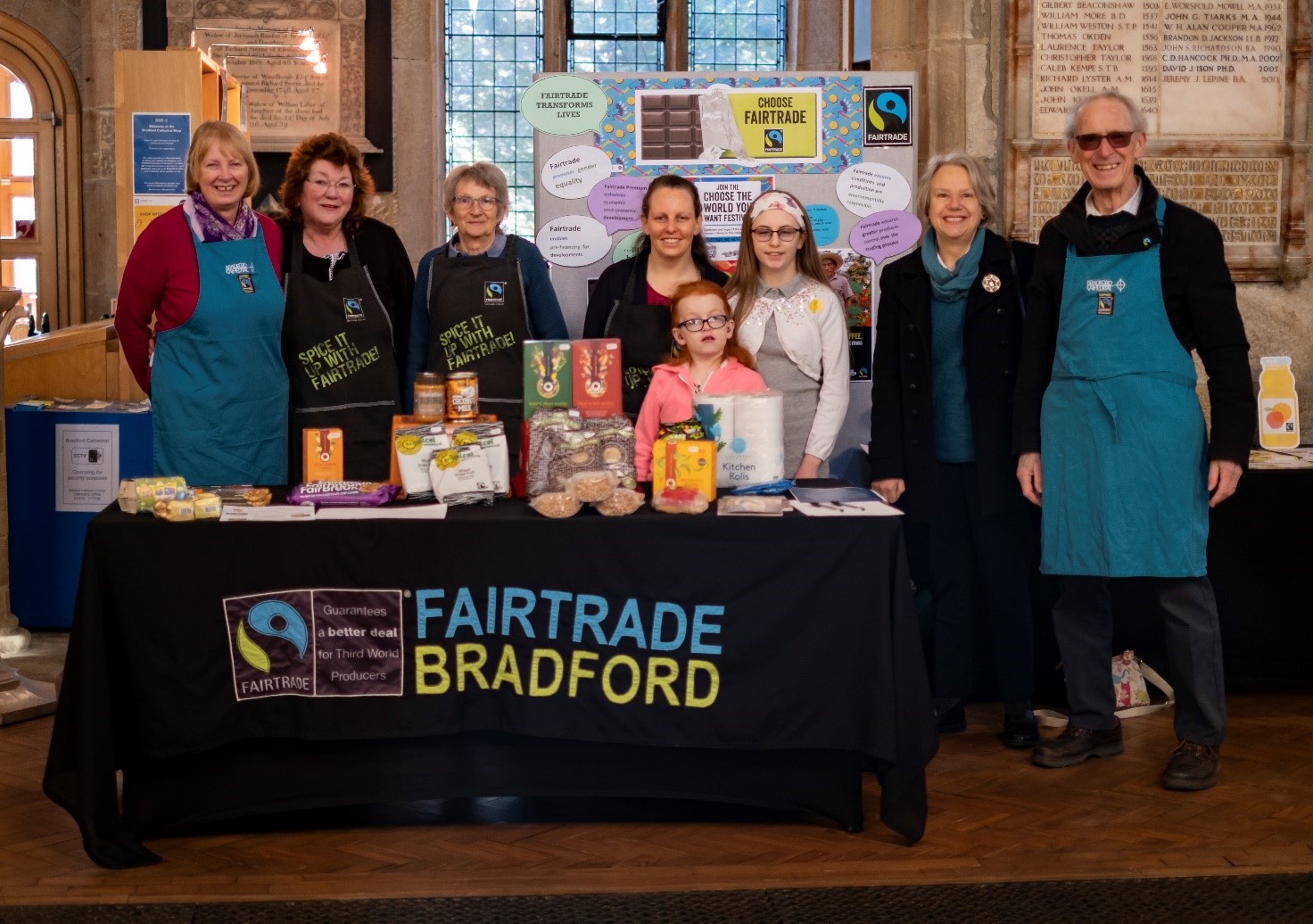 Bradford Cathedral helps ‘Plant a tree for the Jubilee’

Bradford Cathedral was invited to join in tree planting at Newhall Park, East Bierley, back on the 27th November 2021, and Mike de Villiers of the Cathedral’s Eco Group went to join over 100 community members representing faith communities, youth groups and local residents at Newhall Park on a very cold day. 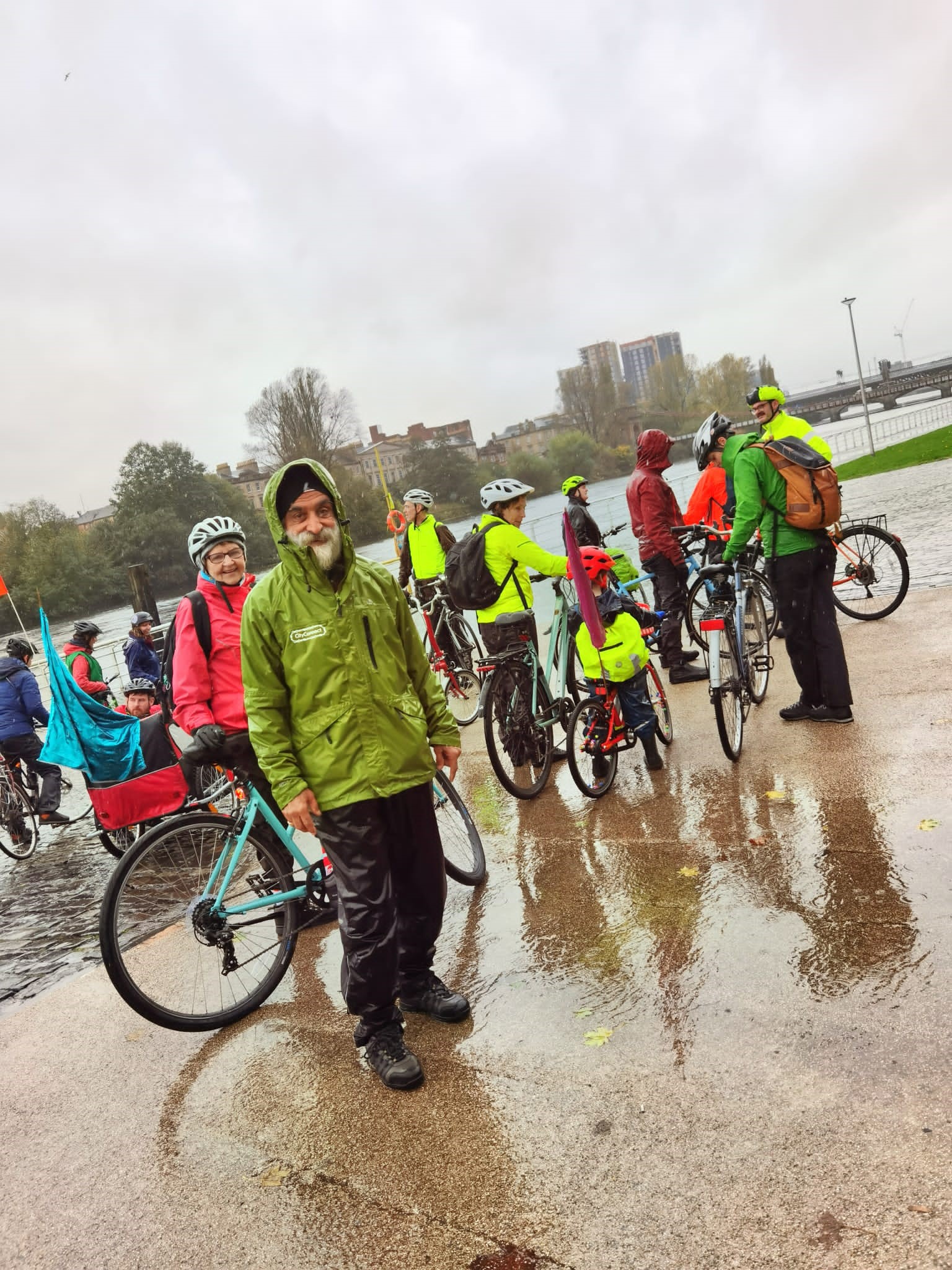 Satwant Singh cycled to Glasgow to take part in the Day of Action at COP26 because he is passionate about cycling and environmental matters. 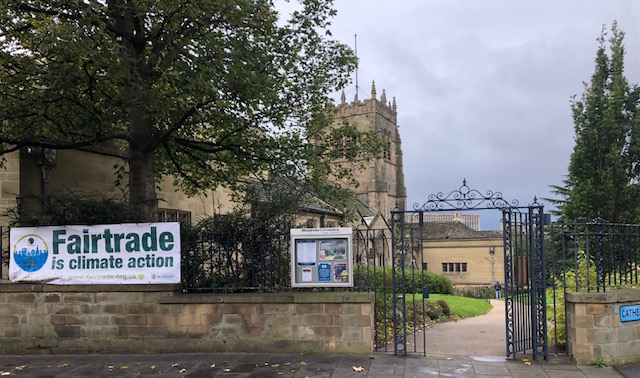 This week’s flower arrangement of Fairtrade roses is given by Elaine and Mike de Villiers in celebration of the beauty of God’s creation. 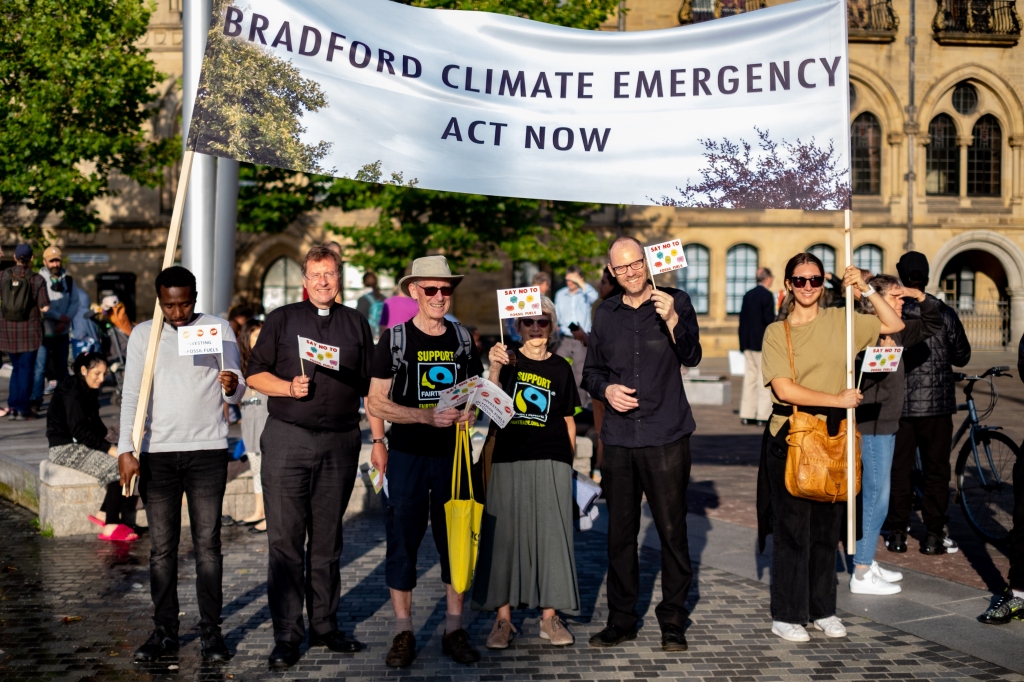 On Friday 17th September a ‘Climate Emergency Walk’ took place from Baildon to City Park in Bradford via Shipley. 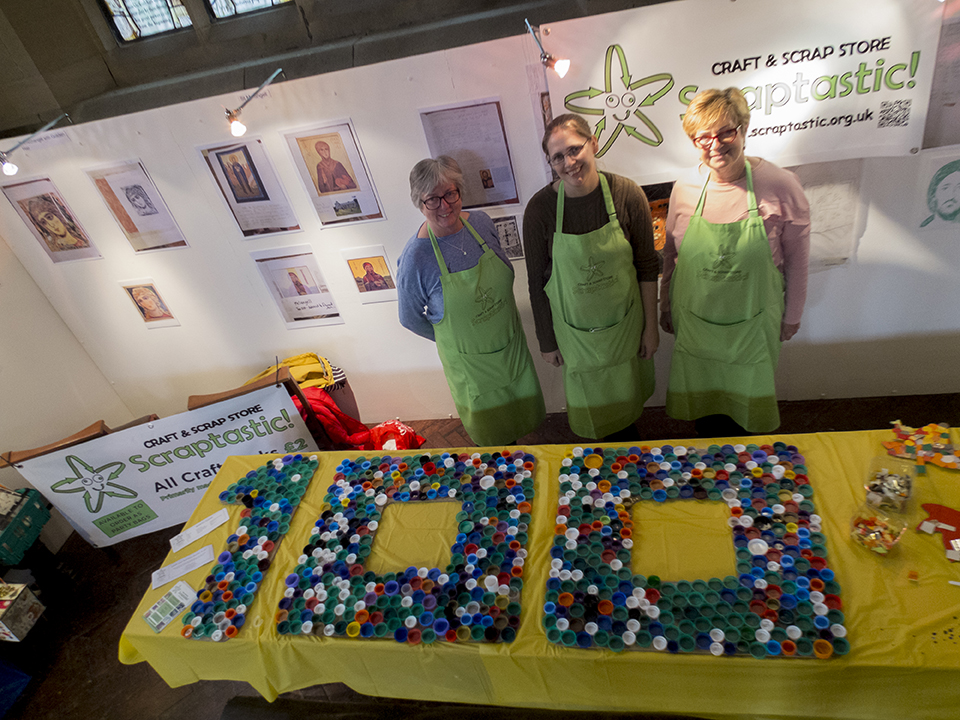 Members of the Scraptastic team with the ‘100’ created from re-used milk bottle tops and donated card, a permanent reminder of the centenary and the environmental focus of the day.

Number of trees planted so far 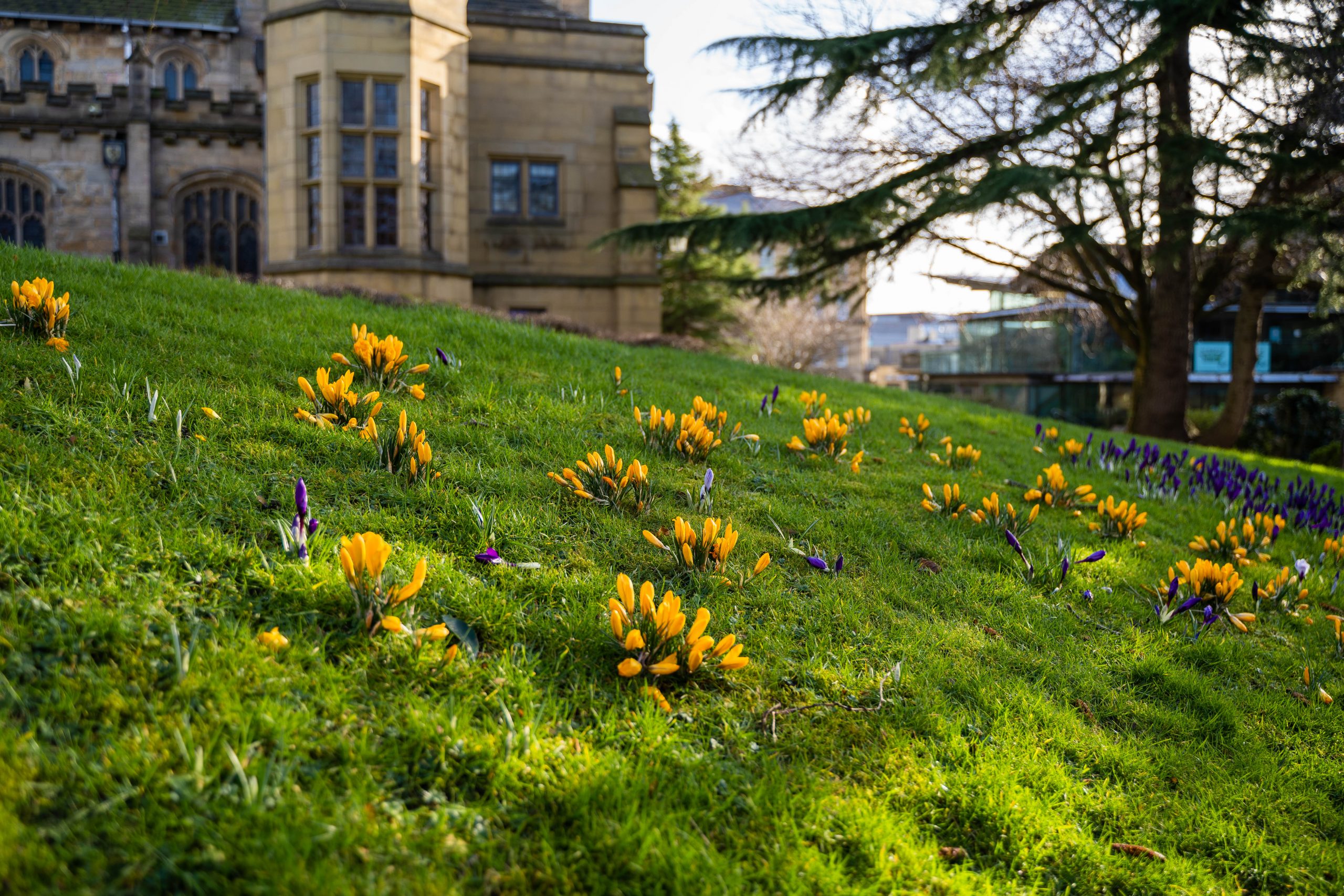 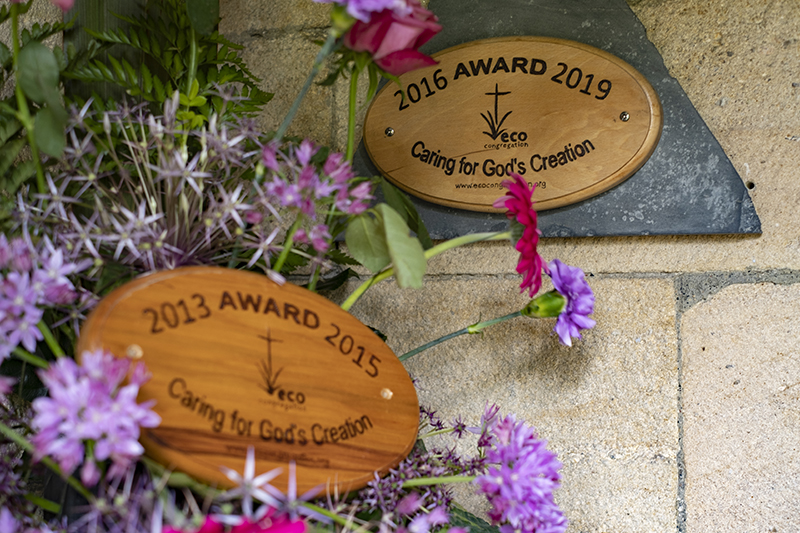 Bradford Cathedral has been awarded for its eco work 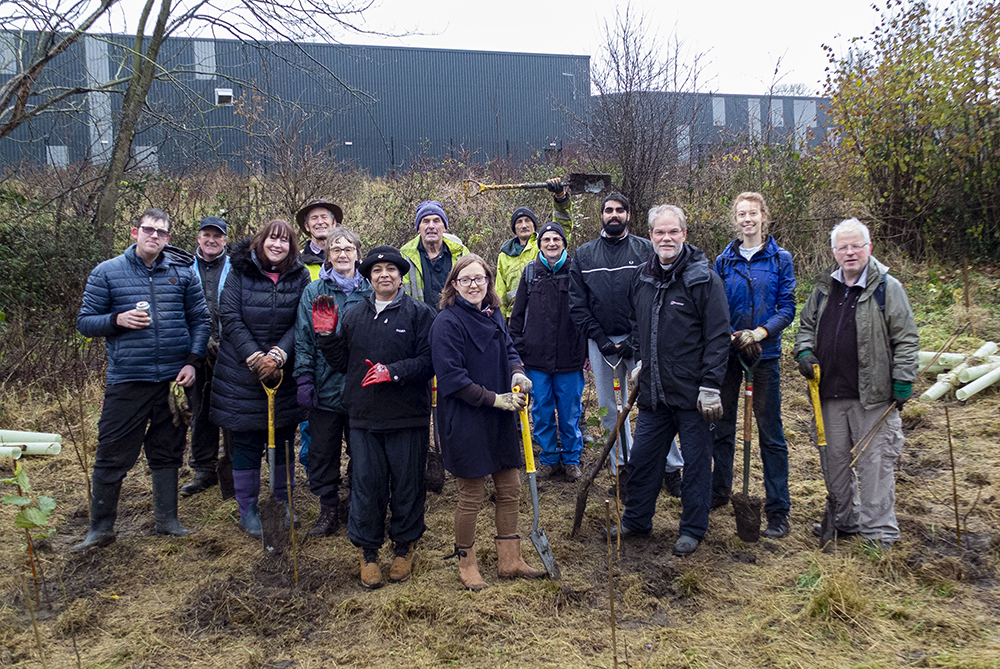 In 2015 we launched a Woodland Project, with a view to planting trees to offset the paper we use in the Cathedral and create a space of natural beauty for the community if possible. In 2016 many discussions were had with The Forest of Bradford and the Local Authority on possible sites.

Aim of the Project

To create a green space in the city which reflects our biblical mandate to be stewards of creation.

Encouraged by The Church of England’s commitment to reduce its carbon footprint by 42 per cent by 2020, the Cathedral has instigated wide ranging initiatives including the installation of Green Cones and Composters, and having the Council supply bins for recycling glass, tin and paper:  supplies wherever possible are FairTrade and milk is now delivered by a local milkman in glass bottles thus reducing the use of plastic containers and supporting a local supplier: sermons often include reference to humankind’s responsibility to look after our world and its resources. Canon Andrew Williams, who has led the initiative said, “We are thrilled! Gaining this award seals a three-year process of examining carefully our use of natural resources and energy then changing our practice in over 20 different ways. But the hard work continues. In the next phase we will aim to share good eco-practice with neighbouring churches and partner organisations.

How it all began …

In 2015 we have the Creation Service through which the Eco group and members of the congregation celebrated God’s creation with a special focus on trees. As a Cathedral we have been looking for ways to offset our Carbon Footprint and we recognized the remarkable gift that trees are to us in fixing CO2 in the atmosphere and producing O2 during daylight hours. Members of the congregation raised enough money to plant over 60 trees, which Forest for Bradford which plant.

We discovered that Forest for Bradford’s biggest challenge is not planting trees or even raising money to plant trees, but finding land to plant. As the Eco Group reflected on this challenge we came up with an idea, why just plant a few trees when we could aspire to create whole new woodland within the city boundaries, which would be a legacy for future generations.

With approval from chapter, the hunt for new land began in earnest, but with the understanding that there is no money to purchase land.

This challenged us to do some ‘out of the box’ thinking to progress the project. We concluded that we needed to look for other organizations to form partnerships. Mike de Villiers, a member of the Eco Group contacted Bradford City Council, a major landowner in Bradford. In time his patience and hard work paid off, as Bradford City Council bought into the project.

Negotiations began between the Cathedral, Bradford City Council and Forest for Bradford, looking at different parts of the scheme, conducting risk assessments and building up trust with each other. In March 2017, Bradford City Council granted a license to plant up the Gaisby Lane site, along Canal road to create permanent woodland.

The land which has been set aside for the project runs from Gaisby Lane northward, running parallel with Canal Road, just passed the garden centre on the opposite side of the road. The site will take one thousand trees. 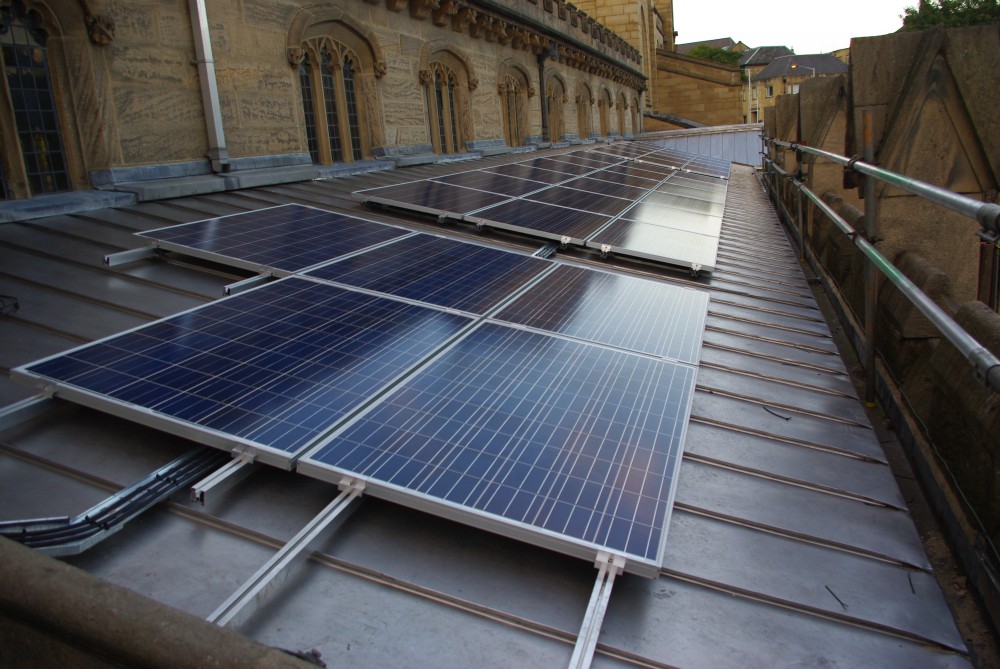 In 2010 Bradford Cathedral received permission from the CFCE (Cathedrals Fabric Commission for England) and English Heritage to install solar photo voltaic cells.   Following planning permission being granted by Bradford Council, the installation of 42 pv panels by Sundog Energy was  completed by the end of August 2011.

These panels are installed on the entire South Aisle roof – making it the first cathedral in the country, and possibly in the world, to generate its own power.  Cathedral architect Ulrike Knox, of Knox-McConnell Architects in Saltaire, led the project through the permissions process for this historic heritage building.

Since obtaining Eco-congregation status – the first Northern cathedral to achieve the award – the move towards solar generated electricity was the next logical step.  Canon Andrew Williams, who leads the Cathedral’s Eco Group, said “We have been working hard over the past five years, not only to become more sustainable ourselves, but to encourage members of our congregation to work hard in their own homes and work places to do the same.  We’ve changed all our light bulbs, introduced recycling and composting, and installed efficient boilers.

We also run a Fairtrade stall every Sunday morning.  We’re delighted to be the first cathedral to be installing PV cells on our roof.  Whilst it would be naive of us to say that the financial benefits are not important, a key reason for doing this is to reduce our carbon footprint.  A 2006 report by the UK Parliamentary Office for Science and Technology has calculated a carbon footprint of less than 60g per kW from PV in the UK, compared to 10 times as much for fossil fuels.

More recent research suggests that the total greenhouse gas emission for electricity from PV panel is between 20 and 80g CO2 under UK conditions. This is ten times lower than the emissions for electricity from fossil fuels whilst electricity from coal can be as high as 1000g/kW.  The net ecological benefit of PV Cells is not contested. Results of research vary between six months and two and a half years as to the CO2 recovery- in other words the CO2 used in manufacturing the cells is paid back at least within the first three years of its use.  As production increases with the high demand for panels, the ‘payback’ time goes down.  At present it would be safe to state that the PV Cells pay back their CO2 emissions in two years in good conditions”.

On World Environment Day 2021 we held an outdoor event where families could create their own bug houses as well as contribute to our giant bug hotel! You can see the video highlights below or find more photos on our Facebook page.