Bradford In Spires: local artist creates mural of towers outside the Interchange including the cathedral 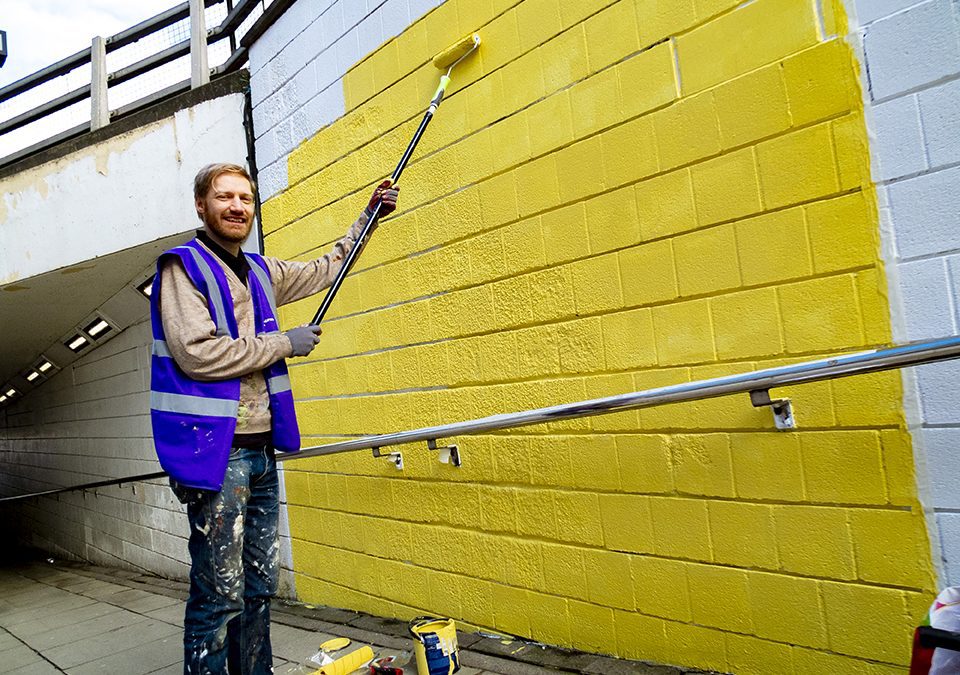 Local artist Sven Shaw looks to Inspire visitors and commuters as a new Bradford BID-commissioned mural outside Bradford Interchange features famous spires and towers of the city including that of Bradford Cathedral.

Sven Shaw, local Bradford artist, known for his murals in the Bradford pedestrian subways, has just started to create an exciting and colourful new mural in the walkway next to Bradford Interchange that will showcase many of the various spires that dominate the city skyline, including that of Bradford Cathedral. Dubbed ‘Bradford In Spires’, Sven was approached by Bradford BID following his work in Bradford, Leeds and elsewhere, to create the project.

We spoke to the artist on the morning of Friday 13th March as he started painting up the first block of colour following the white-wash with had been added earlier in the week.

“I’m a freelance artist. I do murals, but also a lot of print work as well: illustration work and pen-and-ink designs. A lot of my work is quite locally themed and about Bradford and its architecture. I’ve done a series of Leeds, Saltaire and Ilkley images. One of my favourite things to depict is beautiful architecture!”

The paint was provided by ‘Community RePaint’ who collect up left-over paint and provide it to those who couldn’t normally afford to buy it. “They get donations from businesses and individuals, and they can mix up any colour. I gave them a list of what I needed and they provided this. It’s a great national charity association, and the Bradford branch kindly did the white-washing this week and donated all the coloured paints.”

We asked Sven about the process of going from a plain wall to the finishing artwork.

“Hopefully, weather permitting, and with volunteers, we’ll do these panel sections, starting off with the yellow, and continuing with the amber, blue and on. Then, as it dries out, I’m going to add in the architecture over the top. I’ve planned out the measurements for each spire. Each panel depicts a famous tower or spire around Bradford, and I’m going to add them to each one. I then will caption them with the building names and the date they were built, and then it’ll be finished!”

“It’s important to do this as where we are standing is the introduction to the city. It’s the first thing a lot of people see. If the first thing people see are some derelict walls then it’s downhill from there. A good first impression is very important, and they’ll see the city’s highlights and something that’s bright and happy! It’ll give visitors and commuters a good start to their day.”

There hopes to be plans in the future to extend the mural further around the station. Sven, meanwhile, will be following his work outside Bradford Interchange with more designs including a landscape invoking northern phrases and sayings, such as ‘I’ll go t’foot of our stairs’, with the design offering a Yorkshire twist based on Pieter Bruegel the Elder’s  Netherlandish Proverbs.