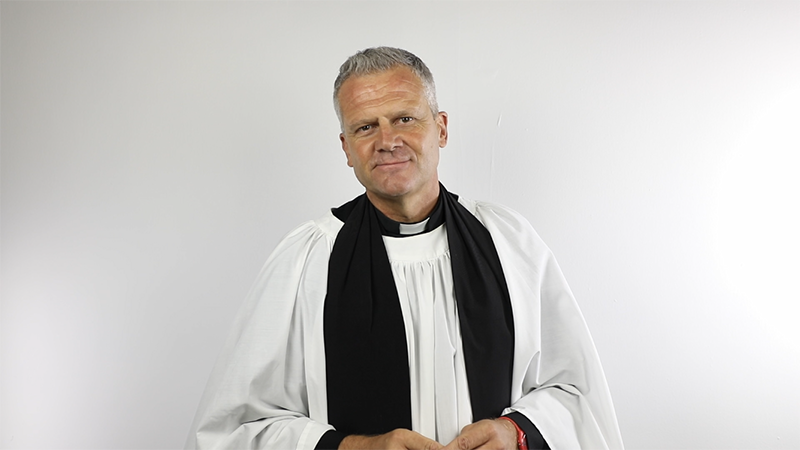 The new Dean of Bradford will be Revd Andy Bowerman, who is to return from Dubai to the cathedral where he was ordained and to the city he loves.

Bradford is also where he served as Bradford City FC’s chaplain from 2004 to 2009 and once ran the popular Vicar’s Café Bistro in Saltaire, amongst his other clerical duties.

Revd Andy began ministry as a curate at St Augustine’s, Undercliffe and now leads the Dubai-based Mission to Seafarers team, offering help and welfare to people in ports across three continents from Egypt to India.

He will take up the post in Spring 2022, and spoke of his joy at coming back to the Diocese of Leeds:

“We feel deeply humbled and excited to be returning to Bradford after a decade or more away,” Revd Andy said.

“When invited to consider the position, I talked about a print by Yorkshire artist Jane Fielder entitled ‘The Prospect of Bradford’.

“It hangs on our dining room wall here in Dubai, as it has in all our homes since we left the city, and it has always prompted me to think of, listen out for and pray for Bradford and her communities.

“I’m married to Ali, we have four children and a grandchild and we’re very much looking forward to leading the cathedral community as it offers hospitality and welcome to pilgrims from near and far.

“We’re also looking forward to reacquainting ourselves with the wonderfully diverse communities that make up the city, plus reintroducing ourselves, and our springer spaniel Harvey, to the beauty of the Yorkshire Dales, having been in the desert of the United Arab Emirates for the last four years,” Revd Andy said.

The Rt Revd Nick Baines, Bishop of Leeds said Revd Andy’s gifts and experience will be put to great use:

“I look forward to welcoming Andy back to the Bradford he loves,” Bishop Nick said.

“He brings wide and deep experience, not only of ministry in England, but also internationally.

“He will bring substantial gifts to the vital work at Bradford Cathedral, in conjunction with the Deans of our diocese’s other two cathedrals in Ripon and Wakefield.”