Andy Bowerman to Become the New Dean of Bradford 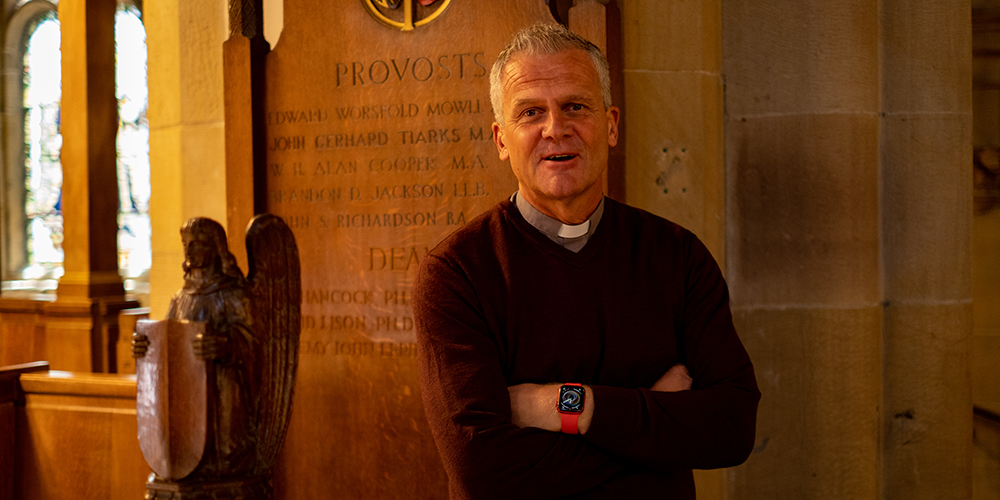 The Very Revd Andy Bowerman has become the new Dean of Bradford, following his installation held at Bradford Cathedral on Sunday 19th June.

The service, which was also streamed online, saw the Rt Revd Nick Baines, Bishop of Leeds, lead the service, alongside the Deans of Ripon and Wakefield Cathedrals and the residentiary clergy of Bradford Cathedral, including Revd Canon Paul Maybury, who has been Acting Dean since the retirement of the Very Revd Jerry Lepine in 2021.

Secondly, he was ‘installed’ – placed in the Dean’s stall in the chancel – which marks the completion of the legal process of the appointment.

“It was a pleasure and a privilege to install Andy as the new Dean of Bradford. We have both interesting and exciting times ahead.”

The role of a dean in the Church of England combines the leadership of a particular cathedral community with membership of the team of senior ordained and lay staff who support the diocesan bishop in his or her oversight of the church’s mission.

The Very Revd Andy Bowerman is no stranger to the city. He was ordained in Bradford Cathedral back in 2002 and ran a successful church in a café / restaurant in Saltaire. He was also Chaplain at Bradford City FC for five seasons.

He returns to the City following four years in Dubai working with the Mission to Seafarers.

The Installation on Sunday 19th June – which was preceded by the Bradford Cathedral bells ringing out across the City – saw the building packed out with congregation members; civic guests and faith representatives; members of the Council; the Lord Mayor; and friends and family of Dean Andy. Music was provided by the Full Foundation of Bradford Cathedral Choir, conducted by Alexander Berry, alongside the girl choristers of Bath Abbey (directed by Huw Williams) of which his daughter is a member.

Other highlights included the presentation of gifts to Dean Andy and his wife from the Church Wardens, and the first sermon by Dean Andy in his new role. The occasion was rounded off with refreshments and the cutting of the cake.

Following the service, Dean Andy offered his reflection on it:

“It was a really moving experience. It was so humbling – but exciting – to be here in front of all those people – friends, family, dignitaries, congregation – and to be able to make the commitments and promises to God and to them, about how it’s going to be to lead this Cathedral.

“It’s wonderful to be back in Bradford. We really enjoyed our ten years here. The people are so welcoming. They’re forth right and honest, and we’re looking forward to seeing Bradford flourish and becoming the City it can be.”

Dean Andy had also spent some of the week prior to his Installation walking from Ripon Cathedral to Bradford, along much of the Yorkshire Heritage Way.

“My son and I have done a few of these pilgrimages. It’s just great to slow your pace down, to take a bit of time to just allow God to speak to you through nature, and the journeying together, and we’ve enjoyed doing that.

“I’ve got to complete the pilgrimage now by going from here to Wakefield of course!”

And, as Dean, there’s much to get ready for with Bradford 2025 on the horizon.

“Bradford 2025 is such a wonderful opportunity. Finally, people are seeing the potential here in Bradford and the Cathedral absolutely wants to play a full part in making sure what is delivered for 2025 – and beyond – puts the City in the place it deserves to be across the UK.”

You can view more photos from the Installation service over on our Facebook page.

About the Very Revd Andy Bowerman, Dean of Bradford

Andy has been married to Ali for more than 30 years, has 4 children and 1 grandson – he considers these his greatest achievements, along with the 20 foster children who have passed through the family.  He holds post-graduate qualifications in social work, elite sports chaplaincy and intercultural coaching.

During the mid-90s he and Ali lived in Pakistan supporting refugees and those vulnerable to HIV/AIDS while quietly supporting house churches. On return he became a Director with a national disability charity before training to for the priesthood, being ordained in Bradford Cathedral in 2002.

Since then he has started a church in a café/restaurant where he was also the chef, explored creative ways of helping people engage with struggles in life, opened a young peoples community hub & ice cream parlour and led churches in Yorkshire, Dorset and Somerset. He spent 4 years working for the Anglican Communion leading the focus on poverty and justice issues.

He was Chaplain at Bradford City FC for 5 seasons following this with 11 seasons at Southampton FC. From 2018 he was based in Dubai working with the Mission to Seafarers. Serving across the Middle East and South Asia, focusing on developing a culturally agile mission centred team on 3 continents. Andy & Ali love to see people of all backgrounds flourish.