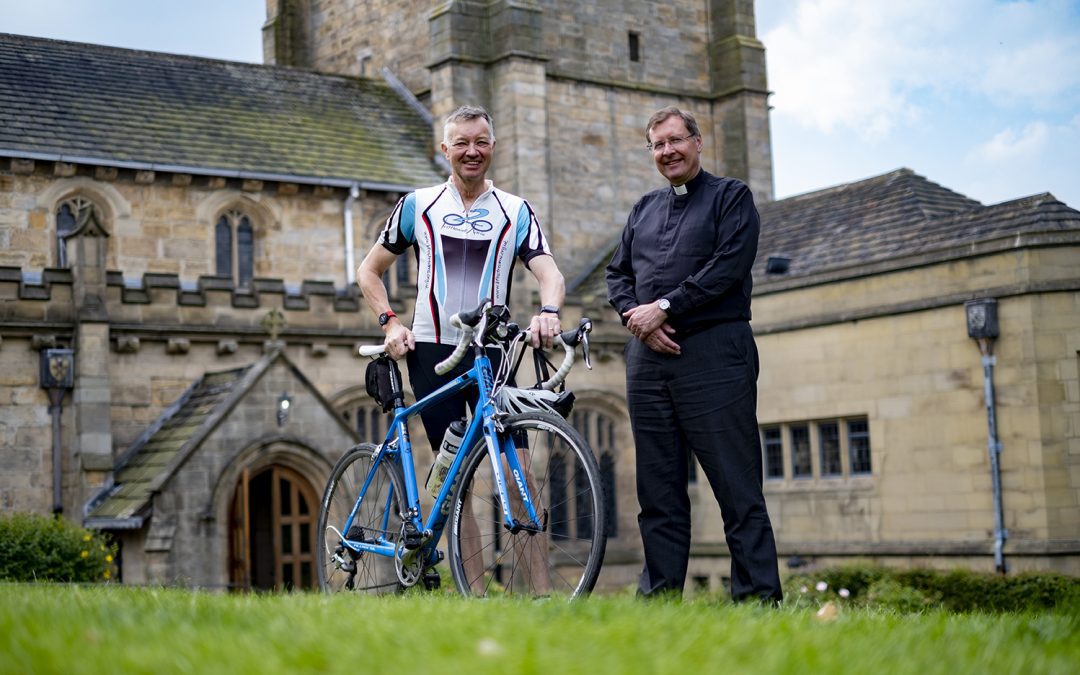 The Reverend Colin Baldwin, from a church in the city of Southend-on-sea, Essex, set off on June 20th 2022 from Guildford by bike on a ten day journey, raising funds to build a much needed centre to serve a needy community, aiming to cycle every cathedral in England.

He arrived at Bradford Cathedral on the morning of Friday 24th June and we talked to him briefly about his journey.

How is the journey going?

It’s really hard work and hard on the body, but it’s also quite exciting! It’s a great pilgrimage to the different Cathedrals. Each one – and its setting – is very different, so it’s been really interesting. But the point of it is to raise money so that’s why I’m doing it!

Could you tell us a bit more about the fundraising?

The church is in an area of high deprivation. The hall was a temporary building given to the church in 1948, and is past its self-by date! The work of the church is being thwarted by the building and we need to replace it.

We’re looking to build new buildings, but it’s going to cost something like £2million, but we can do it bit-by-bit. And we’re doing it as a green build as much as we can.

The last ride that I did – which was the Southern Cathedrals – raised enough money to get the planning permission, which we got – and now we’re trying to build it!

The first phase is to build the community café and the toilets, which is what this ride is about – to try and raise around £150,000 to get that done, and then onto the rest – we obviously can’t raise £2milllion in one go!

You started this leg on Monday; how has it been going?

We started with Guildford to Oxford – and we had a fantastic night there in that beautiful city! We’re more than a third of the way through now, and approaching half way. It’s been really good. We’ve been to Lichfield and Derby and Southwell – again, a beautiful setting there – and then Lincoln, which was superb.

It’s been hard work when I’ve been averaging around 80 miles a day. It’s also been very hot this week – and I’ve got a few blisters – but I won’t describe that!

And next is York…

York is a very special place, and we know the Archbishop of York as he grew up in Southend and was our Diocesan Bishop. And then from York it will feel like I’ve really hit the north!

When cycling, you see parts of the countryside you wouldn’t see in a car. Some of the little villages we went past in Oxfordshire were beautiful, with all the wildlife.