The Pulpit and the Lectern 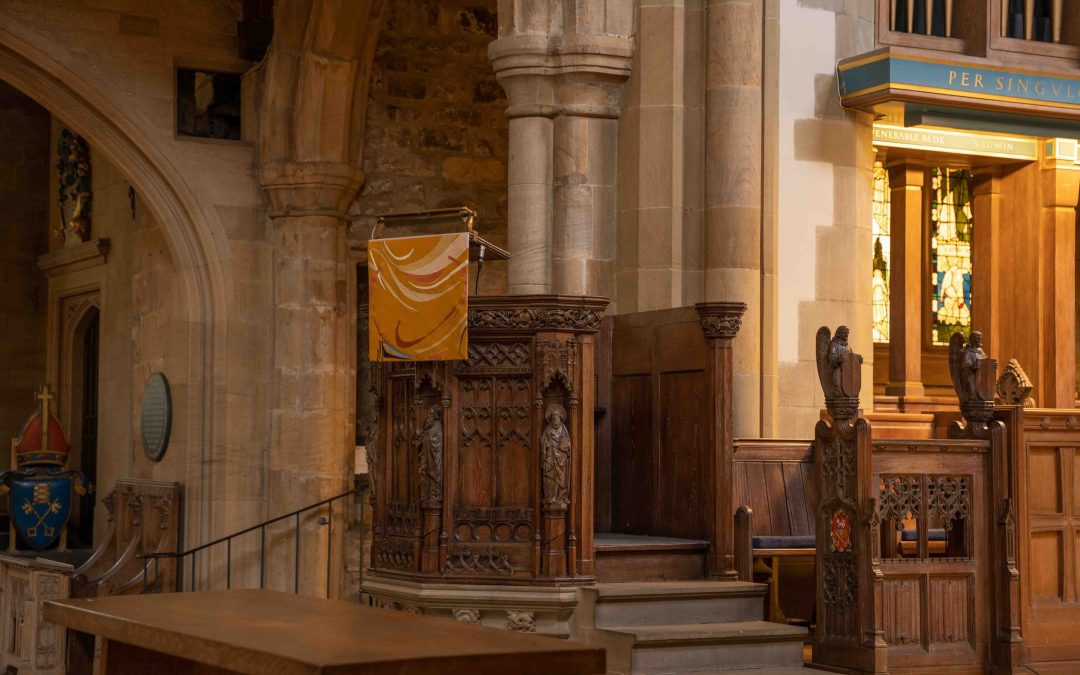 The Cathedral is a Christian place of worship and part of its purpose is to teach people about Jesus and spread the word of the Bible. The priests and congregation do this in many ways. At services in the church the pulpit and the lectern play a part in this process.

The pulpit is a wooden, raised platform where a member of the clergy (a priest or a Bishop, usually in the Cathedral) may stand to preach his or her sermon. A sermon is a talk given to the worshippers during a service in the church, usually based on a story or teaching from the Bible. The pulpit is raised to make sure that everyone can see the person who is preaching. They stand above the other worshippers. Sometimes a member of the congregation may be asked to read something from the pulpit.

In the Cathedral the pulpit has a stone base and it is elaborately decorated with the four Gospel writers (see below) Matthew, Mark, Luke and John. Can you see the green man carved in stone? The green man is believed to have begun as a pre-Christian symbol, but is featured in many Christian places of worship in this country. Usually he is depicted with leaves around his face and sometimes coming out of his mouth. The first church on the site of the Cathedral was built in a wood and known as ‘the kirk in the wood’. Woods were often places of worship in pre-Christian Britain. Early churches often had a green man or men carved in stone or wood in the building, perhaps as a reminder of the past. They were not known as green men though until 1939 when Lady Raglan Lady wrote an article called “The Green Man in Church Architecture” which published in March of that year, in the “Folklore Journal”.

The pulpit also usually displays a piece of cloth, a ‘pulpit fall’, which hangs down from the place where a written sermon or Bible might be placed. This will be the same colour as the altar frontal, to denote the time of year.

The lectern is where members of the congregation (and sometimes clergy) stand to read passages from the Bible, to lead the congregation in prayer or to make announcements. Many lecterns are designed in the shape of an eagle, which is linked to Saint John, who is credited with writing one of the Gospels. The word Gospel means ‘good news’ and the first four books of the New Testament are known collectively as the Gospels. They are books in the Bible. An eagle is a powerful bird, it is used as a symbol of the word of God “flying” or reaching out to all people across the world.